“Please note that this web site is not aimed at consumers as the information herein
contained does not make reference to finished products”.

Although Ginkgo biloba L. have been traditionally used to improve
mental functions in China since the most ancient times, a systematic analysis of this plant only began in Europe in the last decades (1). 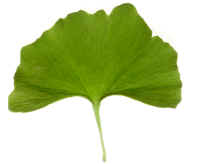 Often defined as a “living fossil”, the Ginkgo biloba tree is the only survivor of a genus originated 150 millions years ago. It derives its name from a wrong transcription of the Japanese Yin-Kwo, meaning “silver fruit”.
In an extensive review by DeFeudis (2) in 1991,Ginkgo biloba is describred as “polyvalent”, as its action is due to the combined activity of several actives.
The major application for the standardized Ginkgo biloba leaves extract concern cerebral insufficiency and peripheral vascular disorders (1).
The term “cerebral insufficiency” indicates a collection of signs concerning the cerebral functions, such as impairment of short term memory, confusion, change in social behavior, lack of initiative, affective and somatic troubles. These symptoms may be associated with impaired cerebral circulation and ageing.